Utopia: It ain't what it used to be 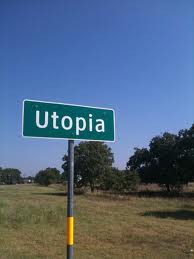 Three stories for you today, all with a link to utopia.

The first is a nice article from David Rieff in Foreign Affairs ("The Singularity of Fools") about the "headlong rush to believe in technology, Utopian or otherwise, seems like the optimism of fools".

The article is a critique of the assumptions many of us make unthinkingly when it comes to development.  For example he says the "rise of authoritarian illiberal capitalism may prove to be just as successful as the liberal variant of the system".  The paper is basically an argument against a homogenised view of what "decent societies and a decent international order look like". It is good to hear these arguments in the context of the post 2015 debate, to remind ourselves of the singular paths to development that most rich countries have taken (and been allowed to take), although I do find the article a bit too depressing. Optimism is great as long as it (like anything else) is not unthinking.

The second is a piece in Foreign Affairs on Africa by Mohamed El-Erian the CEO of global investment management firm Pimco ("Into Africa"). I really like the way in which the narrative has changed about Africa--from "out of" to "into"; from "heart of darkness" to "land of opportunity".  The macro statistics are really encouraging and the micro ones are improving.  The challenge is to sustain and convert this into people-centred improvements in wellbeing.  Opportunity for investors does not automatically equal opportunity for ordinary citizens. Optimism, yes, but don't over-Utopia Africa just yet.

On to our final Utopian story, the UK's Research Excellence Framework (REF), from the Times Higher Education Supplement magazine ("Refereeing the REF").  The UK government ranks each University department and then allocates funds on the rational basis of this measured excellence (IDS is not part of the system as we do not qualify as a separate university).  This is a fun pro and con article by wife and husband team, Amanda Goodall and Andrew Oswald, two senior academics in the UK system.  He is anti REF and she is pro.  As in any good debate, the arguments are compelling on both sides.

On the pro side--the REF promotes a stronger research culture, makes faculty hiring more transparent, and leads to an increased chance that funds follow better research.  On the con side: the framework is too risk averse (big ideas suffer and so does interdisciplinary research), books, which might be read by the general public to generate impact, are disincentivised and less attention is paid to teaching and other jobs.

For me, the cons have it--just.  I applaud the goal--to recognise and reward research quality in a comparative way--but I suspect the REF creates all kinds of incentives that risk devaluing the overall research culture--to make it more competitive than cooperative.  I'm sure there is research going on now to test that hypothesis--I just hope it gets published in a high impact journal or we may never hear about it.
Lawrence Haddad at 10:43
Share