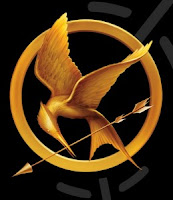 When I first saw the ads for the film Hunger Games I was pretty appalled. Hunger should not be the topic of a violent reality game show, even in a dystopian future. So I read the book, despite my 10 year old son telling me that all the kids in his class had already done so.

The book is clever. It is one of those stories that different people can read into it what they want to. For some a love story, others an action flick, others a tale of survival, others a warning of what the future might bring.

For me the book was all that, but the theme of hunger really does run strongly through the tale. The protagonists spend an incredible amount of time on food: thinking about it, looking for it, conserving it, plotting over it and, of course, doing without it. If it gets kids in Europe and North America taking food less for granted, then that can't be bad.

The book is also a reminder that hunger is created. Not by games, but but by the rules of the game. Hunger is caused by lack of political representation, weak rights to land and water, technology that does not reflect the needs of the most vulnerable, gender discrimination and financial systems that will not take risks on the poorest.  These rules of the game are the outcomes of power asymmetries and they are all stacked against the poorest and most hungry.

That is why we at IDS are doing so much research on practical ways to create a more enabling environment for hunger and undernutrition reduction.

It is the hunger rules that need to be contested, not the hunger games.
Lawrence Haddad at 15:31
Share