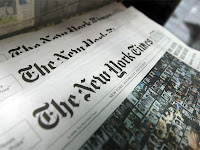 Last week I was at a presentation by Nicholas Kristof the Pulitzer Prize-winning New York Times journalist (who was also cited recently by the folks at Aidwatch on DIY Aid).

He was telling the nutrition community that they needed to do a better job of "slicing and dicing" the issues and the solutions if they wanted ordinary citizens to pay attention to malnutrition. He cited the "malaria=bednets" branding as one example. Why the need to resort to this? Because the media has no interest in covering things that happen everyday (e.g. children dying of malnutrition). There is, he said, "no day in which this is news". He argued that the humanitarian community was not particularly good at "pitching itself" either.
Not much new there really (Charlie Beckett has written much more thought provoking stuff on the role of the media in development).
I tried and failed to ask Kristof a question: why wasn't his newspaper, the New York Times, doing what the Guardian is doing with its Development pages and supporting informed debate among its readers who are interested in development? Of course the Guardian experiment runs the risk of insiders talking only to insiders, but at least the Guardian is trying and will presumably evaluate whether there is any valued added.
Come on New York Times, DIY!
Lawrence Haddad at 07:27
Share