Redefining the measurement of poverty 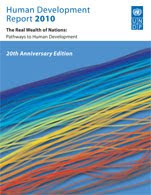 
Of course, despite the widespread use of the $1.25 and $2 a day measures, few people think a lack of money is the sole determinant of poverty. Some material things that are important for poverty avoidance cannot be purchased because markets don’t exist for them or state provision is not responsive in a legitimate way to increased household income. Just as problematically for the $ measure, some things –such as freedom, dignity, and respect--cannot be purchased.

A major advance has been made in addressing the first of these issues by Sabina Alkire and the OPHI team with their new Multidimensional Poverty Index. I was fortunate enough to be a commentator at a panel on this at the recent DSA Conference. The index was officially launched in the Human Development Report 2010 last week.

The multidimensional poverty index uses existing household and individual data from surveys (MICS and DHS surveys) and combines incidence (is a household/individual below a certain threshold for a poverty indicator?) with the breadth of poverty (how many of 10 indicators is the household below?) to give a measure of poverty that more closely mirrors lived poverty. The details of how it is constructed are to be found here.

The MPI’s development has involved Jim Foster, the lead architect of the FGT Po, P1 and P2 indices which are sensitive to the depth of poverty and are fully decomposable (capable of disaggregation by subgroup unlike the $ a day measures which use extrapolation methods based on more infrequent income and consumption surveys) and is methodologically sound. It is also timely: it feeds into debates about what “progress” is, the design of MDGs post 2015, and it helps round out discussions of impact.

And the MPI and the $ income measures do give very different results for some large countries: Ethiopia and India have much higher poverty rates with the MPI, while China has a slightly lower MPI poverty rate (see page 2 of OPHI Working Paper 38). These results feed into the poor countries/poor people debate about how to prioritise development cooperation.

The MPI cannot incorporate some dimensions of poverty such as freedom, rights, and empowerment but this is not a conceptual issue, more a lack of data. The MPI is not perfect of course and currently it does not do a very good job of capturing mortality (unlike the single data point per country Human Development Index which captures it through the inclusion of life expectancy at birth).

I have a few worries about the use of the MPI:

• Will the mass of data required to construct the MPI make poverty rates less nimble when it comes to evaluating the impacts of fast moving events? It would be useful if each context could identify one of the 10 indicators as a bellwether that tracks the MPI fairly well. This could be collected annually in-between more comprehensive data collection exercises.
• Will the processed data will become available (and easily accessible) for others to use or will the complexity of the programming required to construct the MPI lead to a climate-gate situation where processed data are not freely available?
• Will the World Bank embrace these measures? They set the standard for much development orthodoxy and my sense is that the HDI has not been very influential at 1818 H Street or in Ministries of Finance around the world.
• Will we get too many replication studies which merely substitute single poverty measures with the MPI? We need some, but I suspect we will get into negative marginal returns pretty quickly unless we are careful.

Having done my fair share of data intensive work, trying to tame surveys I salute the OPHI team on their vision and persistence in giving life to the MPI. Data crunchers the world over please use it (and explain it).
Lawrence Haddad at 10:34
Share