Fortification: It's a bit more complicated than "add, stir and distribute"

One of the great things about being at GAIN is that I have the chance to learn about lots of new things.

Surprisingly, one of the new things I am learning about is fortification.  Surprising to me, because if you are not an expert it is easy to think of fortification as "add fortificant,  stir and distribute".

A recent PLOS One paper (including two of my new GAIN colleagues) shows how misguided such simplistic thinking is.

The paper contains two pieces of analysis, both from the Indian state of Telangana (36 million people, containing the city of Hyderabad).  Both analyses are drawn from a survey of children 0-35 months of age residing in the catchment areas of all the ICDS centres in the state.   The survey found that 79% of all salt samples from the households of the selected children were adequately iodised.  BUT, the level of adequate iodisation varied significantly by District within the State and by iodised salt brand.  So even in one of the most easy to fortify substances, fortification is variable.  Work is needed just to maintain effective iodisation levels.

The second piece of analysis aims to examine the prospects for effective fortification of rice.  As I have written in an earlier gung-ho blog, I thought: rice fortification--its a no-brainer.  Well, its a little bit more complicated than that!

First, do the groups in the population that are micronutrient deficient actually consume rice?  Second, do they get rice from sources that can actually fortify rice?  Third, can the rice be fortified in a cost effective way?  Overall, the answers for Telangana are not encouraging.  First, no recent deficiency data exist for Telegana.  Second, if rice could be fortified it would make a big difference to the % of children and women meeting the RDA for various micronutrients (so this indicates the potential). But, third, a quarter of households consume rice they produced themselves and the households that do buy rice buy it from markets that are served by over 600 millers--a complex context for cost-effective fortification.

Of course the rice situation will likely change over time as more people buy rice from market sources and as rice milling and distribution becomes more concentrated, but for now the fortification of rice in Telegana does not look to be a promising solution to reducing micronutrient malnutrition in the state.  The authors examine if the government's Public Distribution System could be a viable delivery channel, but only 6% of households surveyed access rice from this source.  Still, 6% is not bad if the cost-effectiveness ratios look reasonable.

The rice fortification story just reinforces the need for policymakers in the State to look at their food systems to see what they can do to encourage the demand for and supply of affordable foods that are rich in nutrients.

Fortification: its not just "add, stir and distribute" -- but you already knew that!
Lawrence Haddad at 21:03 No comments:
Share

Evidence in nutrition: have we set the bar too high?

I’m going to be honest here, I don’t know the answer to this question, but I think it is a question worth asking:  is our quest for evidence enabling or inhibiting us when it comes to acting to end malnutrition?

I raise this now because over the past few weeks I have met senior people in various development organisations who think the quest for evidence about nutrition interventions may have gone too far.

The arguments they put forward include:

* Randomised controlled trials are not the only credible source of evidence and in many cases are not the most appropriate.  Think of the recent BMJ evaluation of the soda tax in Mexico—this was done with good old-fashioned economic modelling.

* Does an intervention really have to show positive impacts in multiple geographies before we are convinced? Are we trying to find design-proof interventions?

* Do the tools we consider to be gold standard lead us away from exploring certain approaches?  Are we only exploring what is amenable to randomisation and not what is meaningful?

This is a familiar debate in development but not one I have heard voiced in nutrition.  Make no mistake about it: the Lancet series of 2008 was a massively positive game changer—a set of proven interventions (“proven” being largely determined by randomised baseline and endline kinds of evaluations) that policymakers could latch onto in their search for a response to the food price crisis of 2007-8.

Nevertheless, I do have some sympathy for the above views.  I am a staunch advocate of rigorous evaluations, but this does not mean RCTs only (and I have been involved in the design of at least 2 RCTs).  Moreover only certain interventions--new ones, ones never tried in a certain context before—need the highest level of rigour.  “Rigorous enough” should be the guiding concept.  We are trying to figure this out for GAIN too—when do we go deep in our evaluations and when is something less heavy “rigorous enough”?

But does the quest for purity on evidence really matter?  Does it really stop action?  I feel like it might be—particularly in stopping creative thinking and experimentation on how to reduce adolescent malnutrition.  A recent meta review cycles through the current options: micronutrient supplementation, delaying age of first birth, increasing birth spacing, and the education of adolescents around healthy diets. OK, but we could have written this list 20 years ago—where is the creativity in this space?

Evidence is the ideal driver of action, but if it is the only driver then we are stuck in its absence.  We can’t be hamstrung by the lack of evidence—we must be driven by it.  Driven to imagine, innovate, design, pilot and evaluate.  Lives depend on it.
Lawrence Haddad at 08:59 4 comments:
Share

The world is urbanising. So is malnutrition. Time to think differently.

This past week GAIN organised an event, in partnership with the Scaling Up Nutrition Movement (SUN) and the Global Health Centre at the Graduate Institute in Geneva, on urbanisation and nutrition.

Both of these issues have been the subject of major international conferences in  recent years.  The second International Conference on Nutrition less than 2 years ago was a major rallying call for food systems to do more for nutrition, 20 years after the first conference in the early 1990s.  Similarly last month’s Habitat III conference on cities was the first in 20 years.   While there have been some voices calling for these two issues to come together, this has not really happened, although things now seem to be changing.

Why has it taken so long?  For a long time the centre of gravity for poverty and deprivation in many low income countries resided in rural areas. In the 1960s and 1970s Michael Lipton was writing about urban bias—policymakers focusing on their potentially troublesome urban neighbours but ignoring the more deprived but “out of sight out of mind” rural counterparts.  As late as the 1990s we could see the massive resource mismatches in Mexico, with most anti poverty resources going to urban areas while most poverty was in the rural areas-this was a big spur to the redesign of Mexico’s social policy programs.

But this picture is changing.  Poverty is slowly becoming urbanised, and, probably, undernutrition is too.  I say probably because we don’t know definitively.  We can track nutrition indicators over time but the designation of households as urban or rural also changes over time.  A simple analysis I did with Natasha Ledlie of IFPRI and Tom Pullum of ICFI for the WHO-Habitat 2015 Global Report on Urban Health showed that in 9 out of 17 countries in the Figure below the urban share of stunting is growing, in 7 it is decreasing and in 1 it is constant. 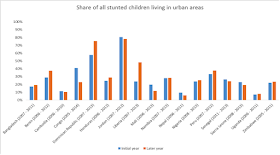 But the big game changer is the growth of adult overweight, obesity and diet related non communicable diseases such as type 2 diabetes.  These are increasing faster in urban areas--in part due to the spectacular rise of the consumption of highly processed foods in towns and cities. A recent study showed that in 6 Southern and Eastern African countries, the consumption of highly processed foods among the lowest income groups in urban areas is almost as high as the consumption of these foods in the highest income groups in rural areas.

Not all highly processed foods are bad for health, but many are: think of sugary drinks, high fat, salt and sugar snacks and fast food made with processed meat products. These foods are more available in urban areas due to fast food outlets, small and large supermarket chains and because adults have less time for food preparation—often they have to travel long distances to work, they have no cooking facilities if in slums and women work outside the home--these outlets are the most convenient, and often the cheapest.

So what are the solutions?  We certainly don’t need to completely reinvent the wheel—many interventions and approaches that work in rural areas will work in urban spaces (e.g. food fortification).  But the opportunity to work with “new policymakers” in the urban space--food buyers for supermarket chains, mayors and municipal leaders, and collectives of opinion formers and activists who are powered by social media—may well create new policy and program intervention opportunities. We need to find these.

To do this, we need to change our perspectives.  Cities are places full of young people.  Cities can be drivers of growth and good nutrition for their residents and for the rural areas they are linked to.  But those of us over 40 probably need to reorientate our thinking.  We were brought up learning about--and experiencing-- rural development.  But rural contexts are different: less market based, with more social capital and more security but with less political power.

We need to engage the new policymakers in our alliances against malnutrition: they are the "unusual suspect"s we need to unlock the seemingly intractable nutrition problems.

For example, how can we incentivise supermarkets to source not only more ethically produced foods but also more healthily processed foods (we have FairTrade, what about HealthyTrade)?  How can we get mayors to care about human infrastructure as much as they care about building physical infrastructure?  How can we get social media leaders to get their followers interested in food systems as well as political systems?  How can we get the strong tech innovation hubs in cities to focus on disrupting food systems as well as disrupting car transport systems?

Malnutrition in all its forms is driven by confluences of powerful forces: poverty, inequality, urbanisation and globalisation to name a few.  To combat them we need powerful alliances of actors to come together to act.  Urban spaces provide many new challenges, but also many new opportunities.  We need to open our eyes and take them.
Lawrence Haddad at 08:56 2 comments:
Share
‹
›
Home
View web version