Now is Japan's Time to Shine for Nutrition 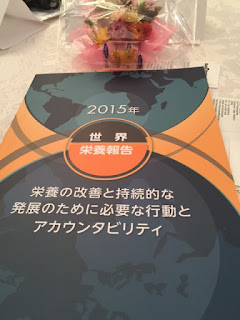 Food and nutrition are high on the agenda in Japan policymaking circles right now.  The G7 meeting in a month, hosted by Japan, the passing of the N4G torch in Rio in early August, the TICAD (the Tokyo International Conference on  African Development) conference in late August—all are stoking interest.
In this context it was great to be invited to Japan to launch the 2015 GNR in Tokyo earlier this week.  The launch was hosted by Save Japan, Results, World Vision and the Network for Action on Malnutrition.  Officials from the Japanese government were present: from the Ministry of Foreign Affairs (the Food Security Working Group), the Japanese International Cooperation Agency (JICA), the Ministry of Agriculture and some key parliamentarians.  Over 200 people attended.


In addition to the launch we met with JICA officials working on a new initiative to be launched at the G7, and with the G7 reps doing the background work for their government’s representatives to the G7.
In my presentation I urged the government to do the things in the slide below.  Japan is one of the most important donors for nutrition specific interventions at about $60m in 2014, but this is down from over $100m in 2013, so the first order of business is to get this back to over $100m in 2015 and then in 2016 to $150m, at least doubling over the 2016-2020 period compared to the 2010-2015 period. 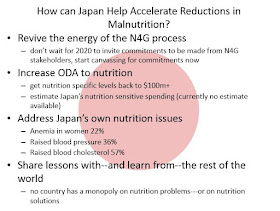 I also urged the government to estimate how much it is currently spending on nutrition sensitive actions.  I suspect it is quite a large amount, but Japan has not estimated this.  If they did it would help the government to assess where it is strong and where it could strengthen the nutrition impact of current resources.  We will invite them to do so for the 2017 GNR.
But Japan can play a bigger role than this. It can improve the enabling environment for nutrition in Asia and the Pacific -- and beyond.  Japan was a founder member of the SUN donor network, so it has shown vision and ambition on nutrition.  But Japan can play an expanded nutrition leadership role in the following ways.
﻿﻿

*As the 2020 hosts, Japan can really energize the N4G process after Rio through a 3-4 year series of stepping stones including making some ambitious and SMART pledges at the TICAD conference, pledges aligned with the aims of the recently announced Decade for Action on Nutrition.
* As a leading practitioner in working with the private sector in development, Japan can bring some learning to the nutrition arena about the opportunities and pitfalls of working with business and how the former can be maximized and the latter minimized.

*As the perennial holder of the Asian Development Bank brief, Japan should work hard to get them as interested in nutrition as the African Development Bank, under Akin Adesina’s leadership and the World Bank under Jim Kim, seem to be.  I still remember giving a talk with Stuart Gillespie in 2000 at ADB HQ on a project, funded by the ADB, looking at opportunities for advancing nutrition in the Asia Pacific Region.  In a large auditorium, the audience was 10!  Most malnutrition is in Asia.  If the ADB bankers want high and secure returns on their investments they need to invest in nutrition.

* In a country that has a high diet quality, Japan should lead the G7, N4G, TICAD and ADB towards this overlooked dimension of food security, one that is equally important for the prevention of malnutrition in all its forms.  Poor diet quality is now the number one risk factor in the global burden of disease, but food systems choices are not influenced by this fact.  Japan can be a leader in how to develop food systems that deliver more affordable diet quality.


I left Tokyo full of optimism that Japan will enhance its nutrition leadership over the next 4 years.  Japan’s leaders now have a once in a decade opportunity to inspire the entire world of nutrition. A great first step would be a breathtaking SMART commitment launched in August, either at the N4G or TICAD events.
Lawrence Haddad at 08:13 No comments:
Share
‹
›
Home
View web version