The SDGs: A Great Gift to Nutrition Accountability – If We Accept It 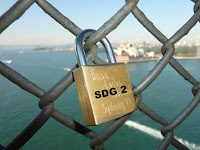 Today I was at a workshop organized by the SDG2 Accountability Group, convened by ONE.

My presentation made 6 points about the gift that the SDGs represent to strengthen nutrition accountability.

1.  The 17 SDGs are said to be indivisible.  For nutrition this is certainly the case.  In the 2016 GNR (to be released on June 14) we analyse the 230 brand new SDG indicators and we identify over 50 that are highly relevant to nutrition, coming from 12 SDGs.  And SDG2 is not the Goal that contains the most of these indicators!  SDG2 is a starting point, not an end point for accountability on nutrition.

2.   The SDGs refer to malnutrition in all its forms.  This means overweight, obesity, high blood sugar etc as well as stunting, wasting anemia etc.  Bringing in stakeholders who care about accountability in these manifestations of malnutrition does not represent a distraction, but an opportunity.  The NCD Alliance, the Food Foundation and Jamie Oliver’s Food Foundation—to name a few—can strengthen accountability for all of us by bringing in citizens and others who would not normally focus on undernutrition.

3.   End Malnutrition.  Ending as opposed to halving (as in the MDGs) malnutrition means that we have to prevent and end malnutrition wherever it may happen.  High hanging fruit are no longer safe.  This means getting more disaggregated data.  In the 2016 GNR we conduct an analysis that compares stunting levels at the sub national level within 60 countries and find extraordinary differences between regions with the highest and lowest rates within each country.

4.   By 2030.  Having an endpoint is really helpful.  The MDGs obviously had this, but somehow the end date feels more meaningful when the goal is to end rather than halve malnutrition.  In terms of business as usual estimations, how long would it take for us to end anemia in women?  Never mind a Decade of Action, more like a Century of Action.

5.    Be SMART.  Too few countries (and other stakeholders) make SMART commitments.  As the 2016 GNR will show, only a small percentage of commitments made by governments are SMART.

6.    Collect more data.  Four of the WHA indicators rely on regular survey data like DHS and MICs: under 5 stunting, wasting and overweight and exclusive breastfeeding rates.  For these indicators across the 193 countries, we can only make on/off course country assessments for about half of the country-indicator pairs.  Targets without assessments are about as useful as an iPod Classic without headphones.

These SDG gifts need to be accepted and then used.

A few quick reflections on the first 3 hours of the workshop (I couldn’t stay longer).

* It is great to see ONE back in the nutrition fold after a brief hiatus.  Welcome home.

* The big value added of SDG2 Accountability (I think) is bringing in new and innovate ideas about (a) how to use existing data better, improving interoperability and user interfaces, (b) how to tweak existing data collection initiatives that are not motivated by nutrition but could work well for it, and (c) how to collect nutrition data in completely new ways.  Interestingly the 3 presentations I caught on “big data” were from companies.  Keeping my skepticism in check (e.g. data quality, data representativeness, the limits of interoperability etc.) I found the presentations intriguing.  I want to find out more.  We all should.

Urban Jonsson: a towering figure in the world of nutrition and human rights

We learnt yesterday that one of the giants of nutrition and of human rights, Urban Jonsson, had passed away.

If ever there was a better proponent of Neil Young's famous line "it's better to burn out than to fade away" I can't think of one.  Urban went down swinging, for nutrition, for rights, for humanity.

Why was he so great?

Well, for starters, he was a conceptual thinker.  Want to know where the UNICEF framework came from?  What the Lancet framework was inspired by?  Answer: Urban Jonsson.

He understood the importance of politics in nutrition. He had a stint as a politician in Sweden.  He was a master communicator and he understood how to do deals for nutrition.

He was practical yet idealistic.  He popularised the triple A cycle within UNICEF (assessment, analysis, action) and he popularised (with others) the importance of rights in nutrition and in development more broadly--he was eloquent in explaining how people had to have support to claim rights and how duty bearers often needed support to deliver on those claims.

He was fearless.  He basically said whatever he thought, no matter the consequences for himself (and sometimes for others).  This got him into trouble quite often.  Sometimes it made him unnecessarily controversial.  And while he often sucked the oxygen from a room, he usually substituted that with boundless energy and passion.  Read about him here, in his own words.

The first time I ever spoke to him was on the phone in 1994 while I was working in South Africa.  He called me up out of the blue to "summon" me to give a presentation at the UNSCN meetings that year.  It took me about 20 minutes to convince him I would not attend -- because I would be on honeymoon!

He was that kind of a person--he wouldn't take no for an answer when it came to nutrition.  We need more people like that.

I will miss him, as will thousands of others.
Lawrence Haddad at 10:19 3 comments:
Share

Why Norway needs to get back it's nutrition mojo

The Norwegian people and their government are some of the most generous in the world when it comes to development.

For example, Norway gives over 1% of its gross national income (GNI) to overseas development assistance (ODA).  And yet hardly any of this is going to nutrition, according to the OECD reporting system.

For example Ireland spends $20 million each year on basic nutrition, Norway spends $0.8 million.  And yet Norway has given us some of the great thinkers on nutrition and used to be very active in nutrition 10-15 years ago.

I brought this up at the Oslo launch of the 2015 GNR today.  I also pointed out that Norway was not a signatory to N4G nor a member of the SUN donor group.

So what is going on?  Several explanations were provided by various panelists.

1.  Norway provides funds to multilateral organisations and funds, many of which are highly relevant to nutrition (e.g. UNICEF, WHO, GAVI, GFF)

3. Norway has other priorities (education and women's health).

On the first and second, the assumptions are that these mechanisms are supporting malnutrition strongly.  They may be, but they may not be.  We know that funds going into sectors that could support nutrition are much more likely to actually support nutrition if they have a credible plan to do so.

If I were a Norwegian citizen, my response to the first 2 explanations would be "show me".  Show me that the spending in these areas is actually nutrition sensitive.  Use the methodology that the SUN donors have developed so you can make a comparison.

My response to the third explanation is: "you are undercutting your ability to reach these goals by ignoring nutrition".  Children learn less if they are malnourished at an early age.  Women who are malnourished at birth are more likely to have health problems throughout their lives.   So good nutrition is an essential precursor for achieving the other goals.

But even if we accepted these 3 arguments at face value, the lack of profile Norway gives to nutrition sends a poor signal to nutrition champions in Norway and elsewhere.  The Norwegian community needs to feel they are working in an enabling environment.  In addition, by not profiling nutrition, Norway is forgoing the opportunity to influence the multilateral funds and the rest of its ODA portfolio to work harder for nutrition.

Norway needs to signal its commitments to nutrition more clearly.  And if the commitment is found wanting once the funding flows have been counted, then the nutrition community in Norway needs to come together and project collective "people power" to get the government to pay more attention to this vital issue.

Norway has been an important leader in nutrition, but lately? Not so much.  Norway needs to get its nutrition mojo back.
Lawrence Haddad at 14:03 No comments:
Share
‹
›
Home
View web version