Catch up growth? Maybe, but what is catching up? Findings of a new paper

One of the rationales for the focus on 1000 days in undernutrition prevention is that this is when developmental velocity is largest in terms of fundamental systems (e.g. immunity, cognitive development) are being laid down, and any interruption of this cannot be retrieved, at least in full.  So when a new paper comes along that seems, on the face of it, to challenge that orthodoxy it causes a stir.  Such a paper was just published by Kalle Hirvonen in the Annals of Human Biology.


The paper critiques current economic approaches to estimating the extent of catch up growth.  The paper finds considerable catch up growth in a 19 year cohort of children from Kagera region of Tanzania: the mean normalised height for age of the cohort in early childhood is -1.86 and in is -1.20 in adulthood.  Without catch up growth the author shows that as adults the children would have been 4.5-5 centimetres shorter.  The author argues that others may not find this result because they are doing the statistics wrong.  Many studies estimate the slope between adult height (normalised or otherwise) and the height for age of the child.  If the slope is one, then there is no catch up growth—early childhood height for age perfectly predicts adult height.  If the slope is zero (ie there is no relationship) then catch up growth is total.  Most importantly, Hirvonen shows that the slope estimate is mixing up two things—shorter children catching up or taller children falling back.


I think this paper is a good contribution to the literature, but it misses an important point.  What is catching up?  In early childhood, height is a marker of other types of human development that cannot be so readily observed.  They are correlated with height at a particular point in time, not throughout childhood and adolescence to adulthood.
In other words the main functional consequences of catch up in height are related to, well, height.  It is true that there is a premium to height in heavy manual work and for birth outcomes for women, so this is far from trivial, but catch up in growth does not mean a rehabilitation of the systems damaged in early childhood and marked visibly as a slowness of linear growth.
In other words, there is partial catch up of a partial set of human development characteristics.   For me this finding does not weaken the 1000 days focus although it does remind us that this period is not the only one that is important for human development.
Lawrence Haddad at 04:42 No comments:
Share

The 18th century English writer Samuel Johnson said when two English people meet, "their first talk is of the weather." Bill Bryson the American writer, says "one of the most striking things about the British weather is that there isn't very much of it". Jeremy Paxman, the English journalist disagrees and says "life at the edge of an ocean and the edge of a continent means you can never be entirely sure of what you are going to get".

Well, at the moment, us Brits are talking a lot about the weather simply because there is rather a lot of it. The forecast for today is for 4 inches of rain --the total average for February.

There are several strands to this ongoing talk.

1. Coordinating across government departments is difficult. There is no Ministry of Natural Disasters (no sly nominations please) and so responding to these kinds of events requires coordination across government departments. Whether this is needed to address the silent and invisible crisis of malnutrition or the very noisy and visible crisis of flooding in the UK, mounting a coherent response is not so easy.

2.  The UK Government needs to get a grip and to show it has a grip. It is the year before an election for goodness sake. The intergovernmental squabbling has looked very bad for the Coalition Government and David Cameron has had to get involved with lots of "I'm in charge" photo-ops. He is right to be worried.  A recent paper in the Journal of Development Economics (Cole et. al. 2012) looking at Indian State election results shows that voters blame incumbent governments for natural disasters which they have no control over and while governments that were seen to respond quickly and effectively suffered less electorally, they still suffered. Wrong place, wrong time.

3. The UK Government now assumes that  extreme weather events are becoming more frequent and more extreme. The UK Minister of Transport was on BBC radio this morning making this point. This feels like a big deal, although one that many countries have already internalised, high and low income alike.  Even in the US, the National Climate Data Centre's 2013 analysis shows that the frequency of "billion dollar weather and climate disasters" is on an upward trend between 1980 an 2011 (see below). 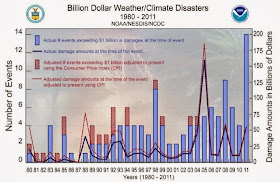 4. The UK Government should divert the foreign aid budget to help people at home. Ah, the Daily Mail, DFID's most loved newspaper. Good old Eric Pickles, the Secretary of State for Local Government said that ODA spent on emissions mitigation would slow down climate change and therefore help the UK. True, in theory, but not much comfort to those currently affected. The UK numbers are interesting: the estimates are that immediate relief response will be about £60m, the repair bill  for the current floods will amount to £1 billion, current spending on flood and coastal risk is about £1 billion, the UK aid budget is about £11 billion and the total UK Government spend is about £800 billion. In other words, there is a lot of money around for relief, repair and rehabilitation. But what of the fourth "R", resilience?

5. Well, resilience has gone totally mainstream. Yesterday alone I heard the word resilience used by the UK PM and two UK Secretaries of State. Get ready for resilience overload. To find out more about the strengths and weaknesses of resilience, and the policies to deal with it, consider attending the IDS short course run by Stephen Devereux and Keetie Roelens on Social Protection: Policies, Programmes and Evidence. It is a new short course and it will be superb. There might even be some politics in it.
Lawrence Haddad at 17:35 No comments:
Share

The Quality of Economic Growth is Not Strained: It is Twice Blessed 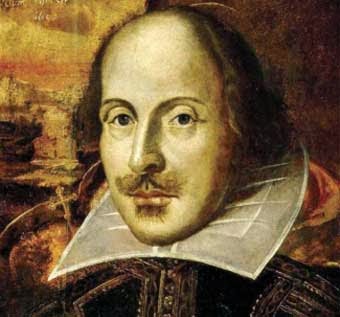 The quality of mercy is not strained;
It droppeth as the gentle rain from heaven
Upon the place beneath. It is twice blest;
It blesseth him that gives and him that takes.

These lines from Portia in Shakespeare's Merchant of Venice were one of the first bits of text I had to memorise in my English literature class when I was 11. It strikes me as a useful way of thinking about the quality of growth.

The way that economic growth is conceptualised and measured has always been the topic of great debate. How can distributional considerations be incorporated?  How can environmental externalities be taken into account? And, ultimately, how can we improve the ability of economic growth to drive the development outcomes we most care about?  Many now talk about the end of growth—about how it is no longer needed or useful.  I prefer to frame the debate not as the end of growth, but as the end of growth as we know it. The 20th century definition of growth must be left in the 20th century and 21st century formulations adopted for the times we live in.

The trends and events of the last decade have moved these debates from largely academic exercises to urgent matters of public policy. The dramatic increases forecast in greenhouse gas emissions, the persistence of the poverty of people despite the increasing wealth of nations, and an increasing recognition of the interplay between different types of growth and different types of fragility have made the search for new ways of framing, measuring, analysing and assessing economic growth even more pressing. If not all forms of growth are equally valuable and some are destructive, what growth do we need and how do we get it?

Our thinking about the quality of growth must not be (con)strained.

Last week I was in Paris for a workshop set up to develop a series of papers to look into these issues. The project on the Quality of Growth is convened by IDS together with the development agencies of France (AfD) and Japan (JICA's Research Institute). I cannot share the papers yet as they are still works in progress, but some interesting findings are emerging:

It is important not to underestimate the challenge of thinking differently about growth. For 80 years since the creation of national accounts, massive investments have been made in consolidating and refining that system.  The creaking nature of the national accounts infrastructure—and how we measure household income--has only become widely apparent in the past 10 years. It will take more evidence, more persuasion, and perhaps more shocks for this agenda to accelerate more rapidly. The collection is due to come out in the final quarter of the year and I hope it contributes in some small way to that much needed acceleration.

A  greater focus on the quality of growth will lead us to a world where we are "twice blessed" by growth:  for what it can do for our individual well being in the near term and what it can also do for us as a community of individuals to safeguard our medium term.
Lawrence Haddad at 14:37 No comments:
Share
‹
›
Home
View web version