Egyptian Revolts: Behind the Narrative -- a Conversation with Mariz Tadros 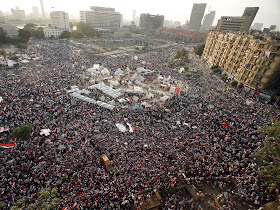 One of our Fellows at IDS, Mariz Tadros, is an expert on political movements and is Egyptian. After reading the Western media, I was puzzled: why is there such relief that a democratically elected President has been ousted by the mob and the military?

These are the questions I posed, and Mariz's interesting answers are in green. Thanks Mariz.

****
Mariz, help me out. This is the standard narrative.

1.  Morsi was elected in a free and fair election. He won narrowly but decisively.

I am afraid it was neither free nor fair- he won by a slim margin (less than one percent) but there was evidence collected by independent sources (AlAhram Centre for Strategic and Political Studies for example) that fraud and voter rigging. These were not taken serious by the electoral commission because they were not independent.

2. He has governed at best incompetently, at worst, autocratically shutting down democratic institutions

Yes, absolutely, and the same precursors that existed before the January 22th Uprising were prevalent in this case as well, i.e. a military disenfranchised and feeling oppressed, worsening economic policies, the absence of any corporatist, inclusive system of governance and the monopolization of power on a macro and micro level in the hands of the Brothers, who basically treated their coming to power as a case of winning the war and distributing the booty (posts) between them. In fact we predicted that we will have another revolt and made this prediction public at least a month before the protests: See Egypt’s Unfinished Transition or Unfinished Revolution? Unruly Politics and Capturing the Pulses of the Street

3. A broad spectrum of citizens have called for him to step down

Exactly -- the breadth of the citizenry surpassed that witnessed in the 25th of January revolution of 2011: Participation, Power and Social Change blog - Missing the pulse of Egypt's citizens

4. The military, funded by the US, have enforced this desire

Yes, the combined forces of the youth movements who had called for the 30th June revolt, the religious leaders, the ultra radical Islamist Salafis all met with the military and agreed on a roadmap that would NOT involve the military heading Egypt, but the head of the Supreme Constitutional Court, until a new constitution is drawn and elections are held. See Mariz Tadros' article 'Opportunities and pitfalls in Egypt’s roadmap' on Open Democracy

However, it is important to remember that the military went AGAINST the desire of the US by responding to the people’s demand for intervention- and which now has meant that the American administration which has supported the Muslim Brotherhood since 9/11 has now threatened to cut aid to Egypt. This may in fact explain the extraordinary bias in the western media and think tanks towards unilateral support for the Muslim Brotherhood against the Egyptian citizenry.

I am confused. It seems to me like all that has happened is that (a) the military has been empowered...

yes of course it has to a certain extent, but remember the military had lost many of its men in Sinai as a consequence of the growth of jihadi militant forces who were kidnapping army men and Morsi was just doing nothing about it

(b) any time any elected politician does anything unpopular she or he will be booted out by revolts...


well I think when elections are not free and fair in the first place, when constitutions are seen as illegitimate because they only represent the will of one political force in the country and when majoritarianism trumps inclusive democracy, then revolts may potentially occur over and over again.

and (c) political Islam has become even more radicalised.

The Muslim Brotherhood political project has been challenged by a significant proportion of the people, but the “Islamist project” per se has not- and there is a fear that the ultra radical Islamists will win any future election however, it is also true to say that a significant proportion of Egyptians have actually turned against those who speak in the name of Islam because they saw how political forces instrumentalize religion for their own ends- so it could go either way really.

Is this mobocracy (millions protesting, yes, but fewer millions than voted)...

no it was not just mobs but whole segments of the state turning against an undemocratic system- i.e. the judiciary, the police, the government employees, resignation of ministers, resignation of members of the shura so it cannot be described as a mobocracy

... democracy (this is how democracy works in countries that have not had it for a very long time)

this is one expression of an unfinished revolution- important to recall that other revolutions were also extended over long periods of time (i.e the French Revolution)

...or autocracy (by the military)?

in view of the fact that a roadmap collectively agreed upon by all parties (except the Brotherhood who refused to take part in the process), and the country is not actually run by the military, I see this as a case of the military playing the role of the midwife preventing the death of the baby (if civil war should occur) rather than the emergence of another military dictatorship.

And were all democratic avenues for getting rid of Morsi tried and exhausted (was the revolt the last possible option)?

yes, during the course of the year, he was asked to establish a technocratic government and he didn’t. On the 30th of June, the military proposed that President Morsi appease the crowds by calling for a referendum on  early presidential elections and he refused.

That’s what I am here for, please don’t hesitate to let me know if there is any further information needed.