Waste Not, Want Not, Incentivise Not: What to do about food waste? 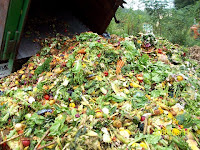 Yesterday the UK's Institution of Mechanical Engineers ("the fastest growing professional engineering institution in the UK. Our 100,000 members work at the heart of the country’s most important and dynamic industries." - from the website) released a report on the extent of food waste, the drivers and what to do about it. The report was written by Dr. Tim Fox and a team of other mechanical engineers.

The report says that food waste estimates range from 30-50% of all food grown. The UK Government's Foresight Report says 30% is the estimate.

Either way, the waste is large. How much occurs at different stages? Data are difficult to come by, but for the UK the Foresight report says about 50% of UK food waste is in the home (people throwing out of date food away, plate scrapings, discarding edible parts of food in preparation), 25% in the food service industry and 25% in the food distribution system. Of that total the Foresight report suggests that about 2/3 are avoidable  losses.

In the emerging economies, a much greater percent of the waste (we think) is in the food production, storage and distribution system--foot rotting in storage, damaged in field, spoiling during transportation, contamination in processing, spillage in packaging, destructive quality testing etc.

The drivers of waste are thought to be increasing incomes (greater demand for higher levels of food safety, perishables, and perishables that are regular in shape), urbanisation and supermarkets (more food purchased, premium on food appearance), globalisation (greater distance travelled etc.)

As always incentives are key, and these are political. It is difficult to imagine food companies and retailers giving incentives to customers to buy less. Governments want companies to do well to create jobs and tax revenues. Governments are also nervous about intruding into home life. In poorer countries, the issue is more outside the home than inside it and infrastructure has been a rather neglected issue in the development/MDG discourse. And Governments want to encourage supermarkets to set up shop, less so to regulate them.

Ultimately civil society groups need to organise better at local, national and international levels to force their governments to do something about food waste.

1. It was interesting to read a report written by mechanical engineers--more emphasis on technological solutions, but an acknowledgement of the importance of politics.

2. Why was this report highlighted by the media so much more than the Foresight report (which I though dealt with this issue more comprehensively--not by me, by the way)? Perhaps because it was a single issue report.

3. The connections of this agenda to obesity (incentivise less overconsumption) and sustainable diet agendas (monitor resources used in production and consumption) are clear, but not as well articulated as they could be.
Lawrence Haddad at 20:25
Share