David Cameron's "Golden Thread": How to weave a better story 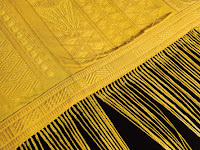 For quite a while now (and well before the 2010 election) the UK Prime Minister, David Cameron, has been referring to a Golden Thread of successful development:

“No conflict, access to markets, transparency, property rights, the rule of law, the absence of corruption, a free media, free and fair elections.” (from his July Family Planning Speech).

The Golden Thread may well become a very important organising principle for the London G8 Summit in June and for the High Level Panel on the post 2015 agenda, which the PM co-chairs.

The Golden Thread has been critiqued in several places (see Owen Barder  and CAFOD blog) -- for being silent on inequality  and being too individual focused, for example.

I think the problems with the Golden Thread go like this:

1. There are dozens of building blocks that are common to development success stories, so why select the above as the gold thread? Sen and others argue persuasively that the golden thread building blocks matter greatly. But there are many golden threads, and so what is the basis for selecting this one? Some will say they are politically motivated/politically convenient.

2. The main problem with the building blocks selected by the PM, it seems to me, is that there is no acknowledgement that people do not start at the same point. This has nothing to do with the normal distribution of skills and attributes in a well off society, but has to do with whether you are born in poverty or not, whether your parents are alive or not, whether your family has any rights to land or not, whether your community is remote or not, whether you are a scheduled caste or not. So if you were malnourished when born and as a consequence grew up to be someone who attained less in school, and has a worse job or no job at all, then you are not going to be as adept at accessing markets, claiming property rights, accessing the rule of law as applied fairly and accessing/using information. You are not going to be able to “work the system”--even if it is fairer and more transparent.

So this means adding a few things to the golden thread…I would suggest empowerment, fairness and collectivity.


I realise that this language is difficult politically for the Conservative Party, but I would argue that the golden thread framing is not diluted by doing this--on the contrary I think it is strengthened by it and it becomes less difficult to attack on purely ideological grounds.